From Forklift to Fork: A Day in the Life of Robbie Sigona, Produce Buyer 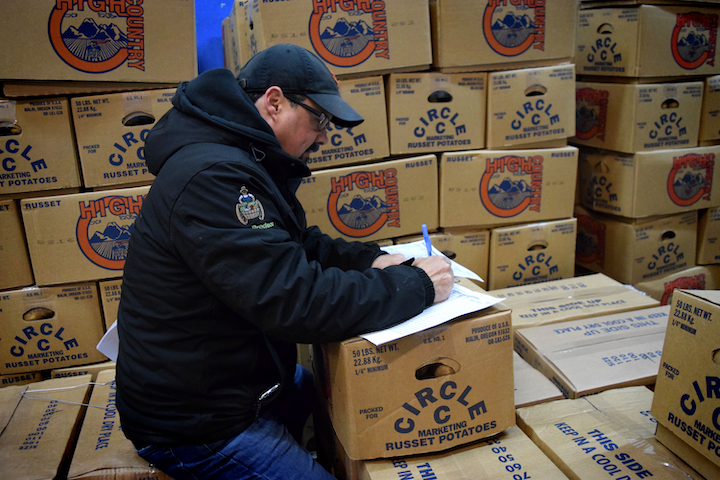 While we’re fast asleep, the workday is just beginning for cab drivers, bakers, stockers, and the people who source the produce at your favorite restaurants and independent grocery stores. Robbie Sigona is one of them. He buys award winning produce for Sigona’s Farmers Market and Sigona’s Office Deliveries, as well as Vesta, an upscale Italian restaurant in Redwood City.

An upbeat jazz tune cuts through the silence. It’s Robbie’s alarm. While most of us are drowsy, hunting for the cool side of the pillow, Robbie is making his first cup of coffee. While he sips, he looks over the sales from the night before. He adds some D’Anjou pears and removes a case of kiwi. The stores can’t have too much or too little. Then he ventures into the night.

Passing a Park N’ Fly, Robbie turns from Produce Avenue onto Terminal Court. Where the giant, rust-colored building finally comes into view. One final righthand turn and he arrives at the Golden Gate Produce Terminal. If you’re in produce, it’s just The Market.

Staccato crashes fill the night air. It’s a symphony of swift braking and abrupt accelerating. Forklift drivers zoom past one another, buzzes and hums accentuated by thuds as they scoop and shed pallets of fresh onions, kale, and carrots. Drivers are confident from years, if not decades, of navigating through the melon, squash, and herb laden parking lot. Many drive backward. They crane their necks, honking their horns in their own dialect of Morse Code. Pallets everywhere: blueberries, butter lettuce, dragon fruit. And the smells. Some areas emit almost no scent while others release the biting aroma of habaneros, poblanos, and jalapeno peppers.

At 150,000 square feet, the market is a fifth the size of Alcatraz. In the 50 years it’s been in operation, it hasn’t changed much. Robbie walks through the same cement corridors, through the same weather worn awnings building his father walked through decades earlier.

After years of spending his early morning hours here, and regardless of the season, Robbie can tell you who has the best blackberries, where to get properly transported bananas, and why it matters.

2:15 AM: Cherries and Cucumbers

“Justin! What do ya got for me?” Robbie walks through a large rectangular doorway. The words SHASTA PRODUCE painted in forest green above the opening. They are one of the largest distributors in the S.F Bay Area.

“I’ve got some really good cherries for ya, Robbie. They just came in.”

Robbie slices the plastic wrap around a pallet of cherries. “These are important. Cherries are huge for the stores,” he says to a visitor.

He plucks a pair of cherries out of the bag and holds one up to the light, “This early in the season I’m looking for color. A good shine and a green healthy stem.” He pops one into his mouth and grins.

Justin, the Shasta salesperson, looks at his computer and rattles off a few cherry varieties and sets of numbers. He pauses his scrolling and glances back at Robbie. “Cucumbers a big mover?”

They walk over to a stack of pallets. Robbie pulls out a cucumber. “I’m looking for uniformity,” he says, grabbing a second for comparison. “Size, color, no indentations.”

They return to the computer. Robbie takes the paper out of his pocket. He unfolds it and examines his notes. Words and numbers fly by as Justin scrolls through the pages on his computer screen, leaning on an elbow. They speak in a code of their own, anticipating one another’s questions and concerns. It’s a familiarity that has come from having daily conversations over many years.

A semi-truck sluggishly crawls past, axles creaking. The driver gives a sleepy nod. Robbie nods back. He makes his way across the lot, hands tucked in his jacket pockets.

“The best I’ve got are 56s for you, Robbie.” Sal is all smiles. He leans on a stack of oranges.

“Let’s check these out,” Robbie says, taking the lid off a box and grabbing a glossy fruit. He cuts into it, “Firm, good color.” He pops a slice in his mouth and offers one to Sal. They both nod. No words are needed.

“Come taste a mulberry.” Sal leads Robbie through the aisles of lemons and limes to get to the mulberries. Sal grabs and opens a small plastic clamshell.

“Where’d you get these?” Robbie asks, plucking one from the container.

They both erupt in laughter at the cliché.

“These are rare, a bit pricey,” Robbie says. He wipes a hand on his jeans, “…but they’re unique. How much?”

“Corner!” A man pushing a bright yellow hand truck whizzes by. He and Robbie exchange good mornings before Robbie turns a corner and heads to one of the makeshift offices in the building. He sits on a stack of potato boxes and pulls out a few pieces of paper. A group of men talk on the phone outside the office.

“I could place an order on the phone,” Robbie says to a visitor, “But when you come in, you see the quality. I never buy without knowing the quality.”

Encircling a pallet of carrots, broccolini, and citrus in long ribbons of cling wrap, a few workers move about the dock. They raise and lower the roll in rhythm, twisting it at just the right moment, tucking some a box corner, and adding tension where the box edges struggle to meet. It’s called palletizing, and there’s an art to it.

The loading dock is a square slab of cement, 20x20.  It’s raised five feet off the ground with a steel ladder and yet another office. The office is the back of a box truck that’s backed up flush with the dock itself. It has everything a produce buyer might need: a desk, chairs, and a calendar. And it moves.

Robbie moves between the office and the dock, opening boxes and making phone calls to his store managers. He consults his list, double-checking every item. By now the sun is up.

The market portion of his day is done. He’ll spend the next several hours at the stores, where he’s the director of retail. At 2:00 PM he takes a much-needed nap. At 8:00 PM he heads to bed.

An upbeat jazz tune cuts through the silence and it starts all over again.